Our family just spent an amazing 10 days exploring the country of Vietnam.

Because there is so much I would like to share with my readers I have decided to do it over several postings. In this article I write about general information about Vietnam and our itinerary.

Vietnam is located in the eastern section of the Indochina peninsula. It borders with China to the north, Lao and Cambodia to the west, and the South China Sea to the east. By the way, the Vietnamese refer to the South China Sea as the Pacific. Approximately 80% of Vietnam is mountainous, with peaks as high as 10,308 feet (3,142 m). Vietnam boasts a coastline 2140 miles (3444 km) long with some of the most beautiful beaches in the world.

The total population of Vietnam is approximately 90 million people. Vietnam has 54 distinct ethnic groups. The Viet (or Kinh) people account for 88% of the population. Most of the 5.5 million ethnic minority people live in the mountains. Even today these ethnic groups distinguish themselves by wearing their traditional local costumes. The national language of Vietnam is Vietnamese. The ethnic minorities also have their own native languages.

Ho Chi Minh unified North and South Vietnam in 1975 and the Socialist Republic of Vietnam was established. Today, it continues to be a communist regime with only one ruling party in existence. However, in 1986 they embraced free market capitalism, abolished the practice of collectivized farming, and gave roots to political liberalization. Today, Vietnam has one of the fastest growing economies in Asia, with an average growth of 7 percent since 2005. In 1995 Vietnam joined the ASEAN (Association of Southeast Nations) and in 2006 it joined the WTO (World Trade Organization). It is now the number one exporter of rice surpassing Thailand. Some of Vietnam’s other resources include: coal, iron, aluminum, tin and oil; as well as many agricultural products like maize, sweet potatoes, soy beans, rubber, lacquer, coffee, tea, tobacco, cotton, coconut, sugar cane, jute, and tropic fruit. There is currently a dispute between China and Vietnam over some of Vietnam’s oil rich waters. 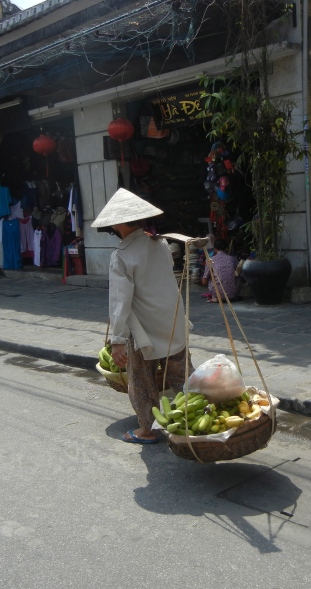 Being an American, I was not sure how the Vietnamese people would react to me. We had after all been in a terrible war with each other. As a child of the late 60’s to early 70’s, my world was surrounded by the idea of the Vietnam War. My Girl Scout leader, Mrs. Marshall, had lost a son to the war. She proudly displayed his photo over the family television. My 6th grade teacher, Mr. McCarthy made us read The New York Times everyday and write a summary of current events. I hated this assignment because the whole front page of the newspaper was about the WAR. Many of my girlfriends wore POW-MIA bracelets. They were bracelets created in 1970 with the names of soldiers who were either prisoners of war or missing in action. The idea was to wear the bracelet until the soldier returned or was found. My parents and I would spend our weekend family outings in Manhattan. We would mingle among the hundreds of people in Greenwich Village, who would either be protesting the war, singing folk music, or displaying their Flower Power signs. And although, my parents and I, dressed in our Sunday outfits, stood out among the 1970’s tie-dyed, longhaired, so-called hippies, we felt comfortable in this setting and accepted by all. My father, who was dedicated to making 8mm home movies, captured some amazing footage of the times.

We all know how our involvement in the war ended, however it would be many years before I would educate myself in detail and fully understand the Vietnam conflict. It would be years later, that one day arriving from an international business trip in the mid 90’s, that I would hear the announcement as I stood in the immigration line, “Flight such and such arriving from Vietnam”. It was baffling to think that we were now vacationing in Vietnam. I knew then that someday I would make the pilgrimage to Vietnam to see this country, to meet its people, and to pay my respects to all of those killed in the sad and senseless war. And so back to my original concern of how I would be viewed as an American, quickly faded for the Vietnamese people showed me only kindness and friendship. They are very proud of their accomplishments and very positive about their futures. However, they have their version of history and proudly display how they defeated the aggressive United States in the “American War” (how they refer to the Vietnam War) and how under the leadership of Ho Chi Minh they were able to unify their country and expel foreign powers. It’s ironic to think that the Communist regime that once fought and defeated American Capitalism in 1975 would later adopt capitalism in 1986.

The length of our visit probably did not do justice to the country since there are so many diverse regions to visit: The Deltas, Central Highlands, Central Coastline, and the Northern Mountains. But we dabbled a little in as many as we could.

Our itinerary was as follows:

Ideally, we could have added 2 to 3 more days to the trip to include Laos or Cambodia to the itinerary or simply more down time by the beach. We decided to focus on just Vietnam with the 11 days we had available to us. This was a very busy itinerary. We did have some free time built into the schedule that allowed us to enjoy the pool and beach.

Although it was necessary to visit the big cities like Hanoi and Ho Chi Minh City, we were truly enchanted by our visits to Halong Bay in the north-east, the ancient cities of Hue and Hoi An in central Vietnam, and the Mekong Delta region in the south.

We booked our trip through our travel agent. She in turn went to several tour operators. We ended up using Cox & Kings. The agent in Vietnam for Cox & Kings was Trails of Indochina, a very renowned operator of Asian tours. The tour was private and customized to our liking. We had our own drivers and guides in each of the regions. We were very impressed with the quality of the guides and punctuality of the transfers.

Vietnam is a treasure trove of rich history, beautiful sights, delicious foods, bright colors, and friendly people. In my next posting I’ll share more of our visit to Vietnam.

3 thoughts on “An Adventure in Vietnam”

From career woman to executive coach to the future leaders of the world, a.k.a., mom,
From continent to continent,
One story, one recipe, one trip at a time,
I hope to inspire and entertain through a collective experience of many,
And serve as a guide to your labyrinth of life.

What I’m Talking About